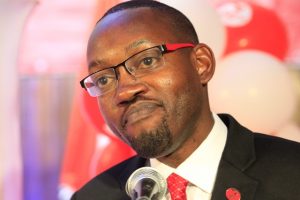 Dr. Kimmie L. Weeks has worked to alleviate poverty and human suffering in Africa and around the world since he was fourteen years old. Kimmie was born in Liberia 1981. When he was nine, Kimmie came face to face with civil war, human suffering, and death.

Over the years, Dr. Weeks has formed partnerships and led organizations that have provided education to thousands of students in West Africa, lobbied the disarmament of over 20,000 child soldiers, and provided health care and recreation supplies to children.

In 1998, Kimmie Weeks went into exile from Liberia and started living in the United States.   Once he came to the United States, Kimmie Weeks established an International organization called Youth Action International to support the needs of families living in post war countries.  Over the years, YAI’s programs  have programs benefited close to 150,000 people in six post war African countries.    Dr. Weeks has continues to serve as Executive Director of the organization.

Youth Action International’s work is focused on providing education, health care and economic to thousands of people struggling to break out of poverty.

Dr. Weeks has been heavily engaged in work to promote tourism in Liberia.   Over the years, YAI has implemented major “voluntourism” programs to encourage US citizens to come to Liberia to experience the beauty of the country and also give time to empowering young people.   This year, the organization is launching a “sustainable village” project, which will help villages on Liberia’s coast line attract foreign tourists.

In addition to his work with Youth Action International, Dr. Kimmie Weeks also serves as Corporate Communications Strategist at Orange Liberia and as the Chairman of the Board of Directors for the Liberia Water and Sewer Corporation (LWSC).

In recognition of his work, Dr. Weeks has received many international awards.   He is the recipient of the Golden Brick Award, The Chase Community Award, and The World’s Children Prize from the Queen of Sweden.   In 2007, Liberian President Ellen Johnson Sirleaf presented Kimmie with Liberia’s highest honor by decorating him Knight Grand Commander in the Humane Order of African Redemption.   Kimmie is the youngest recipient of this honor.

Several documentaries and publications have been made featuring his work.   These include full length documentaries by CNN, Al Jazeera, and BBC.  He is also featured in the book Peace in Our Lifetime as an international peacemaker, along with Nelson Mandela, Gandhi, and Martin Luther King, Jr.

Dr.  Kimmie Weeks received his bachelors from Amherst College and his Masters from the University of Pennsylvania. He also was awarded an honorary Doctorate Degree in May 2011.

Weeks remains a strong believer that the future of Liberia is in agriculture and tourism.